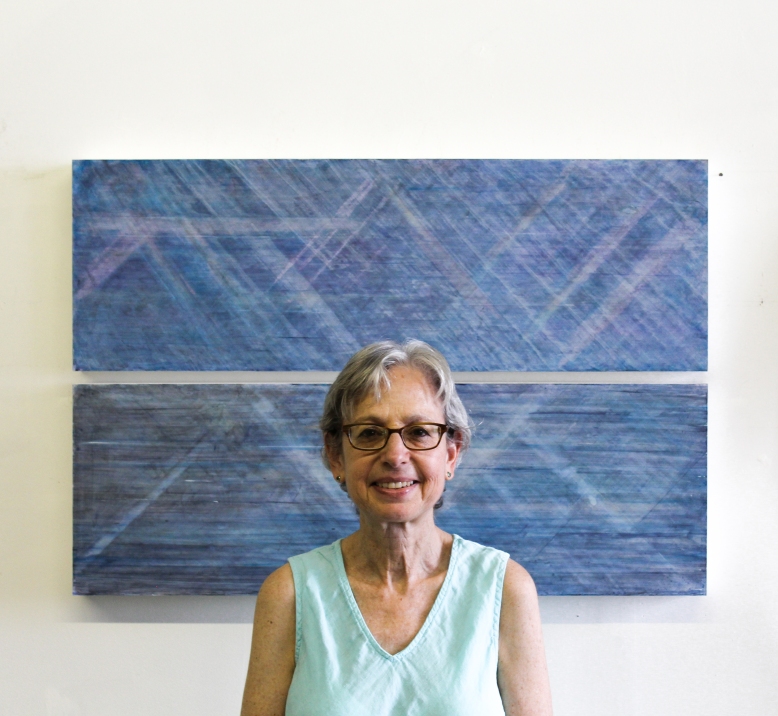 As Ginny Fox leads me through a series of corridors, locked doors, and freight elevators, I feel as if I am about to gain access to personal secrets that have been shared with only a few. Her space is one among many artist studios within the renovated walls of what was once a turn of the century textile mill in Yonkers, New York. Within this microcosm of creatively minded individuals, tucked away from the city, Fox sets to work. Vibrant compositions scattered about her studio interrupt the stillness of bare white walls, punctuated by the occasional nail or two. Marked by the geometric quality and earthy tones of her dispersed paintings, her studio resembles a table of elements made physical and methodically dismantled. I watch as she unfolds the dusty plastic wrappings that have protected her earlier works for years, bringing to light artworks that have become inextricable features of her studio space, and, as I’ll soon come to understand, traces of her creative history. She explains to me that, in more recent years, she repeatedly found herself returning to the same mission: to make color physical.

Before producing her current non-representational, richly hued paintings, Fox experimented with heavily textured mixed media wall-reliefs that blurred the distinctions between painting and sculpture. Constructed of industrial materials, branches, and fabric, these three-dimensional objects were layered in natural tones that infused them with a certain organic existence and tangible presence of their own. But it wasn’t until she discovered encaustic that Fox believed she had at last uncovered the medium that would allow her to explore a more reductive path with color and texture. Viscous and elemental, fiery and earthy, encaustic was primordial color in its most natural state, ready to be melted and remolded by Fox’s graceful touches of energy.

Yet as time went on, the raw properties of this material became problematic. Fox developed health complications from her exposure to encaustic and was forced to abandon her favorite medium altogether. She was not, however, prepared to give up its warmth. Inspired by the translucency of pigmented wax, Fox began to seek new ways to achieve a similar effect. Today, the vibrancy of her colors is intensely palpable due to a carefully executed network of underlying streaks of light across the surface of her paintings. To make these luminous lines, Fox applies strokes of thinly layered acrylic paint that function as highlights in the midst of deeper colors. And by removing some paint with a rag, a tactic that brings her into closer contact with the surface, she exposes a bright foundation underneath. She also occasionally leaves the white borders of her wood panels unpainted, and in so doing, frames her colors with an additional gleam. In essence, Fox harnesses light and shapes it to her will; luminosity becomes the backbone of her color.

When Fox and I near the end of our chat, we notice that the relics of her past have become curiously juxtaposed with her most recent work. Amused, she fondly contemplates the traces of her history with a smile. Thinking aloud, she reflects that her work has not been marked by a linear progression, but has evolved through a more cyclical course. After all, Fox was originally fascinated, and continues to be fascinated by, the capabilities of color and how it is affected by variables such as texture, medium, and light. Fox’s engagement with the physicality of color is a lifelong exploration without a definitive endpoint. In the natural light of her studio, working, reworking, removing, and adding, Fox remains faithfully captivated by the same muse. Her color will always be physical, after all, because it is always present.